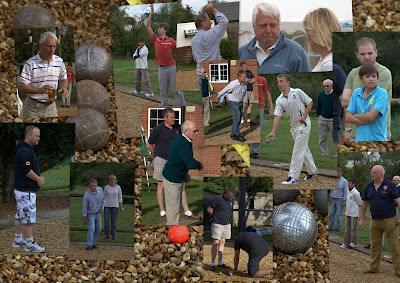 But anyway, rain meant that the ASHES were cancelled on the day. Clive Shaw from the Church side decided that an alternative game of petanque could be played instead.....he should have considered where the strengths of his team lie. Sure enough the Village team strolled to victory with limited opposition from a Thrasher duo. Fun had by all, though somewhat soggy end to the season. President Hopperton cleverly sloped off without awarding trophy, and was last heard muttering that it wasn't cricket...also difficult to make ashes from a petanque ball. I think grudgingly we have to acknowledge a defeat of some sorts to the Village side and congratulate them on a well earned (and hopefully Pyrrhic) victory....until next year. Many thanks as ever to Kevin and Maria who provided excellent refreshments throughout the day....watch out for AGM date later this year.

Posted by Thrashers at 5:44 pm No comments: