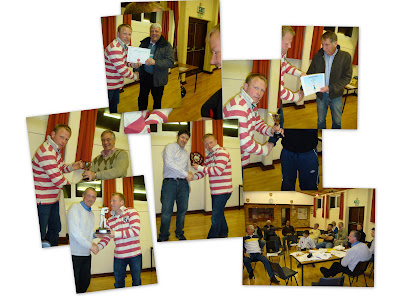 ...click here for AGM minutes
Many thanks to Martin Banks for all his sterling work and support for the club. He voluntarily stood down to make way for Bernard Hopperton as President....however, Martin plans to play an even more active role in future club activities. Also congratulations to Ollie Jordan (best bat), Olli Middleton (best bowler), Richard Smith (clubman of the year), The Newell family (family award), and especially to Jake Cain who was awarded the Cliff Hopperton Cup for most improved player over the season. Special mention was made of Clive Shaw (needs most help), and Pete Pullan (for long hours maintaining pitch). Many thanks to all officers of the club, particularly to James Hopperton for getting teams on the pitch, and Roy Palmer for sustaining a thriving junior section. All bodes well for next season.....
Posted by Thrashers at 7:42 am 1 comment: