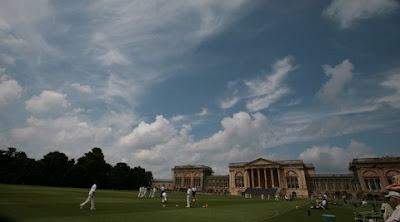 Thought that while we were considering adding some new facilities to the Pavilion, we should use this picture as a template.....I think the pillars are vandal-proof. Taken from U10 Northants match at Stowe school this weekend.....

Posted by Thrashers at 11:36 am No comments:

Tax Office match report to be added by James Hopperton when he works out how to use blogger...
Posted by Thrashers at 8:36 am No comments: 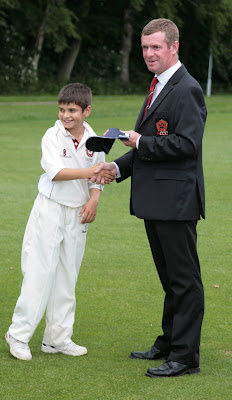 Kimbolton game washed out despite Pete Pullan's valiant efforts to mop up lake on square with a towel. Meanwhile, around the shires LSVCC junior Olly Thrasher received Northants County U10 cap at Stowe last week, and proceeded to demolish Hunts with spell of 3 overs 5 wkts and 6 runs (4 of those runs off a first ball loosener !).....

Posted by Thrashers at 8:32 am No comments:

Close victory against old foes from the Aircraft Research Association
Career best innings from Patrick Dignan, assisted by home umpires unsual interpretation of the no-ball rule half way through innings. ARA never really in the chase, although Hoppy tried his best in penultimate over to gift the opposition an unlikely victory through a series of full tosses and long-hops. Ollie Jordan watching from sidelines as getting married in the morning and didn't want to risk good looks.....spent night in pub instead.
By the way, signed up membership is currently 27 adults, and 43 juniors...not bad for a small club. Also thanks to all for paying subs in good time....except that is President Banks who is still to cough up !
Posted by Thrashers at 3:58 pm No comments: