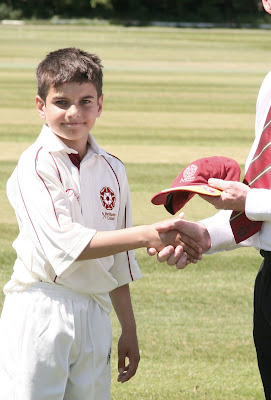 Posted by Thrashers at 5:56 am No comments: 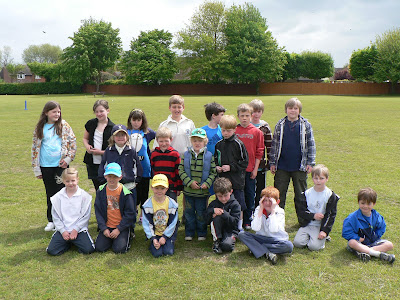 Our “younger” juniors came very close to winning against a Little Paxton team who were on average at least a year older, and considering one of our team had only started playing cricket a week earlier this was a very good performance. Little Paxton batted first in a Kwik Cricket game with each player facing 6 balls. They scored 77 after some great fielding and backing up from our juniors restricted their big hitters from making it to a 100. A good opening knock from Joseph Smith followed by some excellent support from Ben Richards, Benjamin Smith, Danny Wayles and Archie Tomblin, plus some valuable runs from the new team members William Brightman, who decided to bat left-handed to fool the opposition, and Joel Cain brought us within touching distance of Little Paxton’s score. A brilliant captain’s innings from Laurie Stothard, including a big six, almost sealed the game but unfortunately we fell just short with a final score of 72.

Our “older” Little Staughton juniors played pairs cricket facing 2 overs each against an even older Little Paxton team (all around age 12) who the previous week had been practising the reverse sweep. Yikes! Despite playing well and scoring about 90 runs (against Little Paxton’s 61 with no wickets lost), our team unfortunately managed to lose a few wickets. The ball really was lively and had a tendency to fly up off the bat and get caught as most of our players found out, some more than once! The team was: Adam Richardson (Captain), Sam and Emma Edgeley, Neve Palmer, Tommy, Joseph and William Bates, Rosie Stothard, Connor Finch, Libby Brealey, Jake Richards and Zak Hall.

Congratulations to all those involved for exciting matches and showing plenty of promise for the future. Pride was restored later at the barbeque when we clearly ate and drank Little Paxton under the table by a considerable margin! We look forward to a return match in August.


ps the least said about the senior team who were soundly thrashed afterwards the better.....
Posted by Thrashers at 1:47 pm No comments: 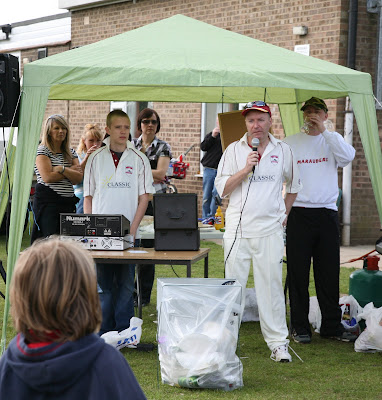 "Expectations were high on Sunday but never did we expect the response we got. A huge thank you to everyone that came along to watch and especially those that helped out on the day cricket returned!

The day started with two youth games Litte Paxton under 9's and Under 12's both ending victorious against Little Staughton Village CC. A very encouraging and welcome sight over over 40 youngsters playing cricket and warming the crowd up for the 'big event'!

Peter Hagger Chairman of the Parish Council officially opened the cricket field during a short speech during which we remembered Jenny Bartlett daughter of our Chairman Vic who sadly passed away in the morning. Paxton won the toss and in front of a crowd approaching 200 (how many County teams would like that size of crowd? ) elected to bat. Ian McGraw, Elan Anish and Wayne Huttly were the main stays of the innings that totalled 252-6 after 40 overs. A new club highest score! In response wickets soon tumbled but with some stability restored Staughton reached 111-3 before wickets started to fall rapidly. Mike Kimpton and Elan Anish tore into the middle order and before long with both bowlers ending an over on hat-tricks Elan polished off the last wicket with the third ball of the over. A staggering win by 141 runs for Paxton - our first win over our neighbours!

An exceptional day for all of us associated with the club - we are back next Sunday with our first home league match against Upwood II with a 1.30pm start."
Posted by Thrashers at 11:11 am No comments: 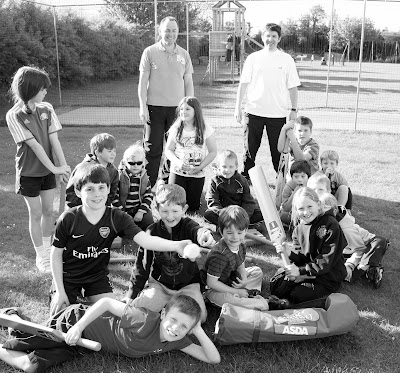 Junior section received extra equipment from Lords Taverners as part of their scheme to encourage cricket at junior level and for clubs with junior sections.....

Posted by Thrashers at 7:49 pm No comments: