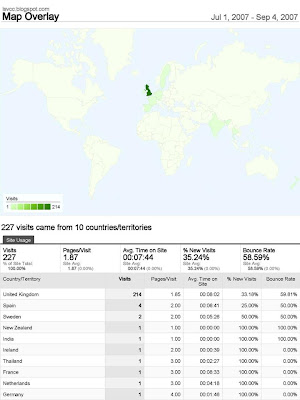 Posted by Thrashers at 7:36 pm No comments: 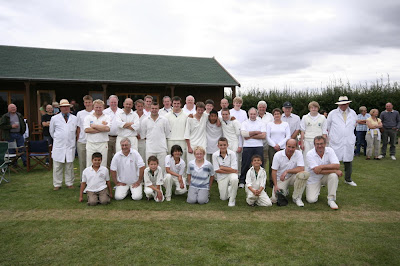 Our season draws to a close as hot summer days shorten to golden autumn evenings. The sun shone briefly and the light faded towards the end of the day. But it was a great for the village, an entertaining cricket match between the Church team captained by Bernard Hopperton and the Village team captained by Tony Moss. Additionally over 200 hundred balloons were released at tea time, as the finale to the fund raising for more children's play equipment. Thanks to Louise King for arranging and leading the work. After the game Mary Jordan conducted the first draw of the village 200 club. Results are published on the web and in the next newsletter.

The Church team won the toss and decided that they would field first. The village got off to a solid start as Jody Arch quickly assembled 30 runs and then retired. The first round father and son competition was engaged with Olly Middleton bowling and Dad Noel batting. Freddie Pullan had to face the demon very slow bowling of Dad Pete. Of course the biggest challenge was to Adrian who had to contend with daughter Maya batting, but he successfully missed a stumping chance. The main benefit of the innings was that the scoreboard kept ticking over. Alas wickets fell as well James Moss and Fred contributed a few runs before Noel came in. Noel played well even with his limping running! Maya was still stroking the ball around the field. Eventually Richard and Tony replaced Noel and Maya. Still the runs were being added. Kevin replaced Richard and Tony was dubiously run out (again), for Gregson to join the fray. Kevin saw the innings through with Ryan after Gregson succumbed. The bowling suffered a little as the batting was building a good score, but all contributed to a good match. A great innings with a target set of 136. Which would be challenging as the light was beginning to fade.

Time for tea, and time to thank the "Wonderful Tea Ladies" for providing savouries and cakes in the best of cricket traditions. All washed down with orange squash and local ale from The Crown.

The Village team took to the field and Church team led by Bernard and Clive started to bat. Bernard was bowled early on, but Clive provided dogged resistance, including breaking Freddie Pullan’s bat! (we can burn the bat for an ashes trophy). Olly Feltz came in next and played a few good strokes and after Clive was bowled LBW, Olly Middleton was in. This spurred a change in bowling on came Dad Noel, who duly did the deed by getting his son out! Fortunately for the Village the scoreboard was not turning over too quickly, but a succession of wides and no balls proved the generosity of the Church team. Next Dad in was Peter Pullan, but unfortunately Fred could not follow Noel, and bowl him. Eventually Peter was out and in came one of the big guns Adrian. Adrian hit a few meaty blows and was soon joined at the wicket by James Hopperton. Expectations were high of quick runs being added. Then Adrian's son Olly came on to bowl his leg spin. An interesting contest was expected. However in his second over, Adrian hit a ball short and called for a quick run, but "Lead Boots" Hopperton had not moved very far from his crease. Alas Adrian was run out, much to the delight of Olly. The church tail did not wag for long after James was superbly caught and bowled by Jody. Mark and Michael did contribute a few more runs before the inevitable final wicket fell. The match end with a victory for the Village by over 50 runs

A resounding victory for the Village and commiserations to the Church team. Better luck next year.

We also gave a few over for the younger players at the end of each innings, which gives them a chance to experience the game.

Thanks got to the umpires, properly dressed and attired for the day, Martin Banks and Roy Hopperton - you must get some glue for your hat!

Thanks to Catherine and Alison for scoring, albeit quite tricky to keep the numbers on the board with the strong breeze!

After the match we retired to the Crown for pork rolls - Pig donated by Bernard and James -and cooked by Kevin and Maria who stayed open to serve the rolls and a few glasses of well earned beer. So started the inevitable stories and tales of heroics as befits such a sporting event.

A big thanks to all who turned out for the day - Attendance count was over 100 - who gave their support to the game and a successful afternoon's entertainment for the village.

Watch out for the cricket awards night date to be announced soon.

Posted by Thrashers at 12:13 pm No comments: