To the gallant members of the Liitle Staughton Village Cricket Club ,

The President Elect of The very honourable Rotary Club Of Kimbolton Castledoes hereby challenge the gallant members of the Liitle Staughton Village Cricket Club to a cricket match on the 26th July 2009, at the said club.

Followed by a sumptuous feast in  the local ale house known as the Crown Inn where much ale and merry making will that place in celebration of such a wondrous day of the sport of willow against leather ..

The Honourable Rotary Club will field a team known as the Presidents Select Eleven.

The Trophy to be awarded to the victorious team will known as The Presidents Middle Stump.

Rules regarding the days play to be decided by agreement of both teams .

Let battle commence and may the best team be victorious , and the loosing team try harder!

Posted by Thrashers at 8:55 am No comments: 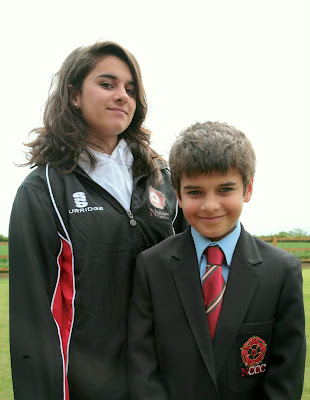 Good to see LSVCC feeding on to higher level cricket....Olly and Maya both representing Northants this weekend, U10s and U15 girls respectively.
Posted by Thrashers at 11:00 am No comments: 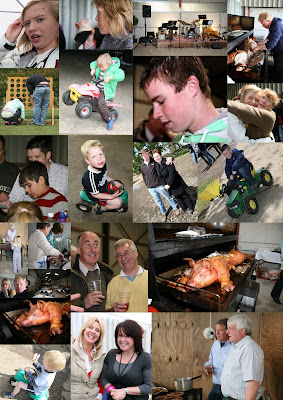 £2264 raised at Jazz and Hogroast event to be shared between LSVCC and The Church.....many thanks to all those who contributed to great day, and particularly to Hoppertons for being the hosts.

Posted by Thrashers at 9:21 am No comments:

First friday evening match a rather soggy event. Visitors from Little Paxton, also a reforming local cricket club. Fun had by all, LSVCC had upper hand when rain and gloom stopped play....meant an early retirement to The Crown for fish and chips. Highlights included Ollie Jordan's unbeaten 50 (although he now has a few balls to find), Glens unbeaten knock from down-under. Hoppy's multiple attempts to get himself out, and Patricks demon bowling (remarkable). Rematch eagerly awaited.....
Posted by Thrashers at 11:29 am No comments: 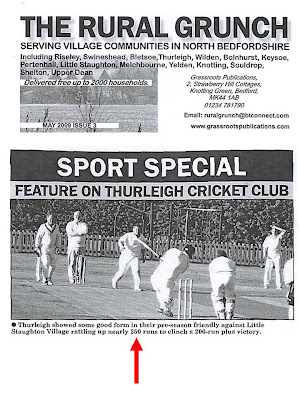 Sunday 3rd May saw 14 of Little Staughtons finest take to the playing field for the 2nd LSVCC Single Wicket Competition.

In true village style the 12pm start soon became a 12.30 ish start, with Jody setting the standard with some very energetic running between the wickets, and a total of 55 of his 4 overs.

The first wicket of the day did not fall until the 4th batsman, and was a family affair with Thrasher senior bowling Junior Thrasher (Ben). Following this wickets started to become a little bit more of an recurrence, and the first run out came about off of the bowing of Pete Pullan, with James running out newbie Clive.

Notice must be made of the tactics of Peter F, giving Simon Stokes a wide down leg, then one outside off, followed by the straight which was in turn missed by Stokes the rest is history.

In the end the event finishes with a Tie, with both James and Adrian finishing with a total for the day of 59. The pair took to the net for a 3 ball bowl off, and with Adrian determined to win it with spin, and Hoppy hitting the deck forgetting it was concrete, the on looking spectators (well players), were starting to think it may be time to take to the pub and settle this with a drink off, when Hoppy chucked down a full toss taking out off peg, and our champion for 2009 was crowned.

Other areas of interest were as follows:

Most Wickets in 4 overs: James/Adrian (3)