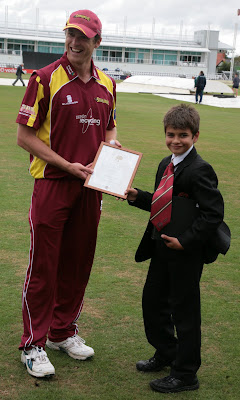 Posted by Thrashers at 7:19 am No comments:

Farewell (for now) to Glenn who has returned to Australia....I'd hoped to hide away, but after day 3 of first test I'm not so sure ! We're pleased that you had such a good time playing for LSVCC, so thank you for your very kind words in support of the club....we look forward to seeing you again in years to come. We'd also like to thank you enormously for generous donation of funds and kit. Keep in touch.
Posted by Thrashers at 6:13 pm 1 comment:

Overview on front sheet when opened, individual stats by clicking the number relating to your name. will upload seasons as i do them have 2008 ready but issues with upload today.

2009 ongoing sheet on going and will update as and when.

Got an 'all seasons' sheet which will update at end of each season.
Posted by Ollie J at 9:19 am No comments:

With Hoppy not playing Ollie J won the toss and on a nice sunny day in Staughton, well apart from the sharp shower about an hour before the start, and a nice looking track (cheers Pete), there was only one option: bat 1st!!!!

Moss and Arch were sent out to open and a quick start was made, a few swift blows and some quick, yes I said quick singles started the board ticking, until Tony had, had enough of Jody's running and took a big swing at a straight one and missed, 1st wicket down. This brought OJ to join Jody and the pair started to form a decent partnership, with some good running, some big hits and a lot of luck from little paxton drop catches. After seeing off the opening bowler, a change of bowling at the dog poo bin end saw to the end of Arch (38 from 45 balls [thanks to the paxton scorer for marking the dot balls in the score book!!])

Phil W and Pat came and went, the latter LBW to an Easy one for Mr Banks to look at. Glen Joins OJ and sets his stall out he's not hanging around for long. A change of gloves later and OJ hits 6 over the childrens play area to bring up the 1st LSVCC 100. Phil Day replaces the retired OJ and He and Glen are not in the mood for running as balls fly to the ropes. with the 200 coming up and 8 overs left, will N replaces Glen (another Not Out knock) and comes back first ball to one that loops onto the top of the bails. Ben W replaces Will and shows him how it should be done. Batman Robbins then replaces the not out Phil with 4 overs to go and has a swing first ball, when Ben finally departs following a solid looking knock Ollie M join the love of his life and lets just say the running was not the best!!! Ollie lost his wicket with just over an over to play, and LSVCC decided not to send OJ back in so with 3 players retired and 1 not out a score of 231 for 7 dec was posted.

Following Tea, Clive took the new ball from the Greys Grove end, and should have had a wicket first ball but for Roy boy not agreeing it was going on to hit the stumps after the batsman forgot he had a bat and used his pads!! OJ then dropped the 2nd ball from a faint edge behind. Batman joined him in taking the ball from the dog poo bin end, and looked to be straight into his stride with some quick deliveries outside the off peg. these two kept balling well and deserved a wicket if not too but it took a change of balling with ollie M taking over from Clive and after testing the batsmans ability and the keepers by spraying the ball all over the place, then getting the batsman to nick one behind with Oj taking a straight forward catch. As Jody rang the balling changes with good spells from all involved (Phil W, Phil d, Ben W, Glen) little paxton managed to move slowly but surly towards their target with out losing wickets along the way.
At the 20 over drinks break Pat departed from the fray falling ill, leaving the fielding rotation easy, all players now on the pitch. with 28 overs balled and the target getting closer their opener passes his 100. A change in plan was formed and Phill D took over behind the stumps and OJ joined the attack to try and slow the run rate down a little. With good spells coming in here from all and the Fielding picked up a little with everyone not wanting to see defeat.

coming in to the final over LSVCC seemed to have done enough leaving Paxton needing 15 from 6 balls and glen balling the final over. With Oj setting a field of EVERYONE on the ropes, the bats man took a couple of byes, and then a wicket 13 off 3 and a new man on strike. with one swing of the bat make that 7 off 2, another bye leaving 6 off 1. Glen looked a little nervous at this point lets hope thats a feeling him and his fellow country men have all summer, but with a good delivery paxton were restricted to 1 from the final ball leaving a LSVCC victory by 5 runs.

A good win in the end, in what was a very enjoyable game.
Posted by Ollie J at 8:25 am 2 comments: